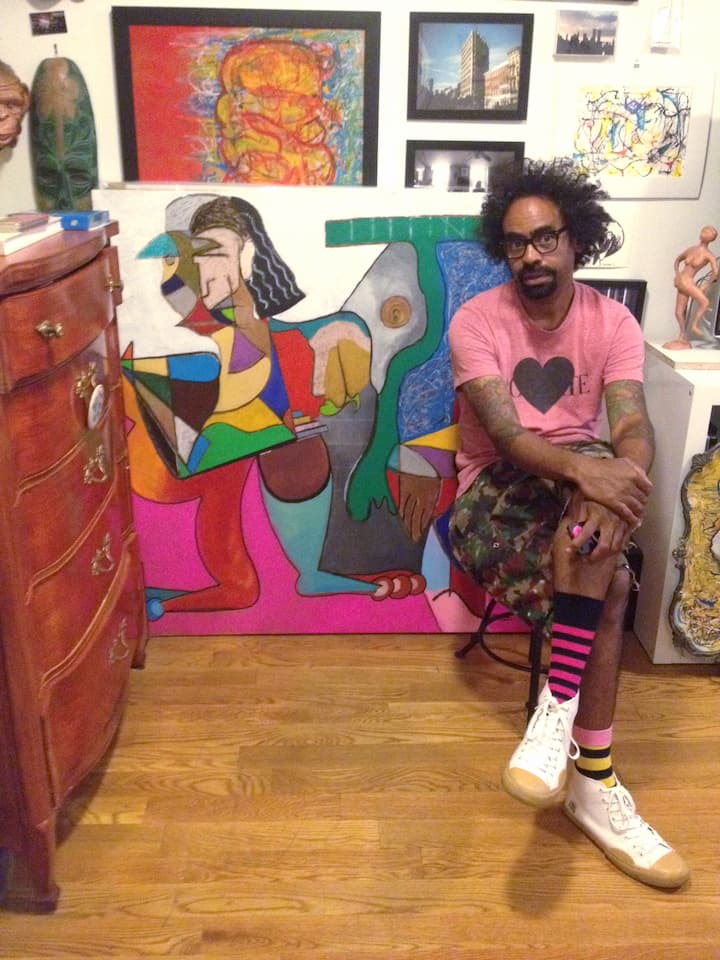 My buddy Dave Ortiz is a visionary, artist, storyteller, and entrepreneur. He's been doing cool things in New York City since he was a teenager and some would say that he's the mastermind behind the whole vibe in the Lower East Side. Every night, Dave sits outside on his stoop in the East Village and people watches. I caught up with him on the stoop where we talked about his beginnings in skateboarding and lifestyle branding, his current art and business projects, and his favorite places to go in New York City.

Tell me about your upbringing in NYC.

I was born in 1970 and I grew up in East New York during the 70s and 80s. It wasn’t what Brooklyn is now and the neighborhood is still pretty crazy today. It’s surrounded by three of the largest housing projects – Pink Houses, Cypress Hill, and Linden Plaza. Being brought up during that time in East New York, there were minimal options. You either became a sports athlete, a scholar, a drug dealer, or you died. None of that interested me. In 1984 I developed an interest in skateboarding and riding BMX and I found a bunch of like-minded kids to hang out with. They all came from similar backgrounds - from lower to middle class families - and we all wrote graffiti and drank 40s. I met a group of friends in Washington Square Park and we would skate and BMX together. We would venture out to different neighborhoods in the Cypress Hills area of Brooklyn and pick up other friends. With those guys we would venture off into the Woodhaven area of Queens and get more friends, then we would all venture into Manhattan, probably to Washington Square Park. The kids at Washington Square Park showed us where the Brooklyn Banks were and we rode over there, then we would go to World Trade Center. These guys became my friends. (Some of them were in the movie Kids, which depicts what it was like back then.) 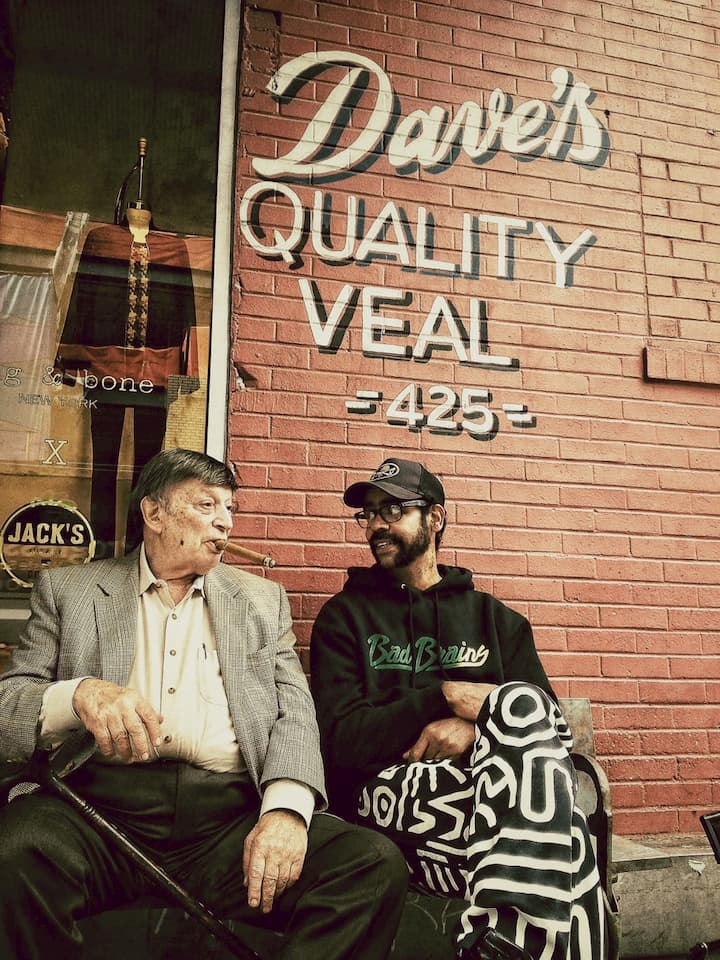 So I bet my friend Eli one dollar that I could take the wackiest, craziest name and make it the coolest brand ever. He accepted my bet. I changed the name to Dave’s Quality Meats because “Meat” was my graffiti tag. 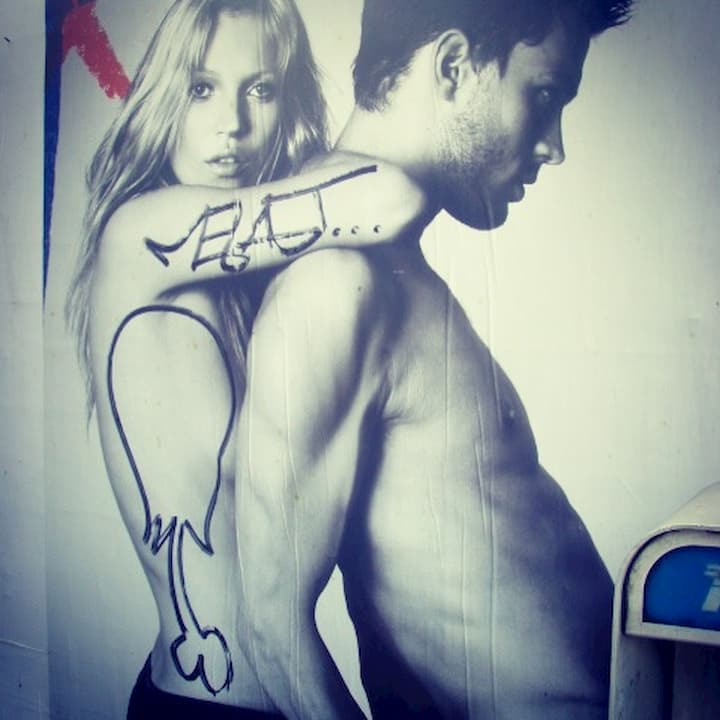 Before the store ever opened, I made t-shirts with the Dave's Quality Meats logo on it and gave it to all my professional skater friends. They would wear the shirts during competitions and journalists and photographers always wanted to know what Dave's Quality Meats was. So I already had brand recognition and didn't even have a store yet. When I pitched to investors about opening Dave's Quality Meats, it was great to be able to say that celebrities were already wearing my brand. 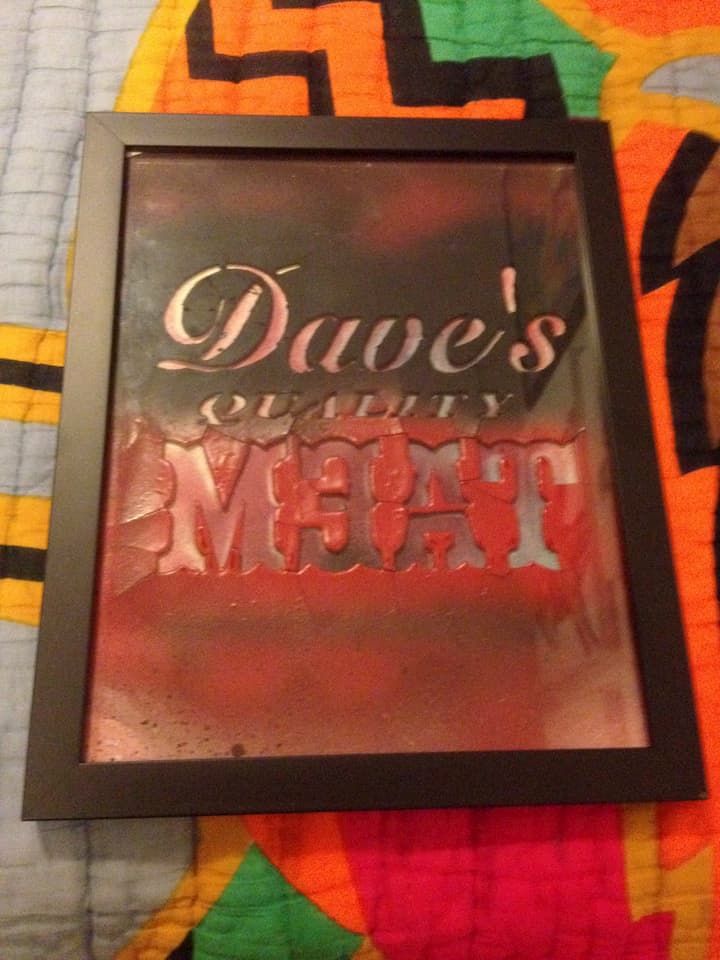 Stencil Dave used to make t-shirts given to professional skaters

In 2001, when I was making plans to open the store, I went to Hogs and Heifers for lunch. A guy in a suit was at the bar buying a beer and he tipped the waitress only $1. She got pissed and called him a fucking asshole, said that he was a cheap bastard and that he should have tipped her more than he did. For no reason I decided to butt in and defend the guy. I knew the bartender and told her to chill out and give the guy a break. He was surprised, said I had done him a favor, and thanked me. We got to talking and he asked what I did for a living. I told him I was in skateboarding and wanted to open a store.

He was a rezoning lawyer who had just signed off a bunch of buildings that were going to be built on The Bowery, which was still a super shitty area at the time. He said to me, “Get yourself on The Bowery because it’s going to change.”

I tend to take advice from people. I listen to them, unless they’re drunk. Because of him I went out and got myself a 10 year lease on East 3rd and Bowery for $3500 a month. Within a few years the Bowery Hotel went up, then Cooper Union, then everything. 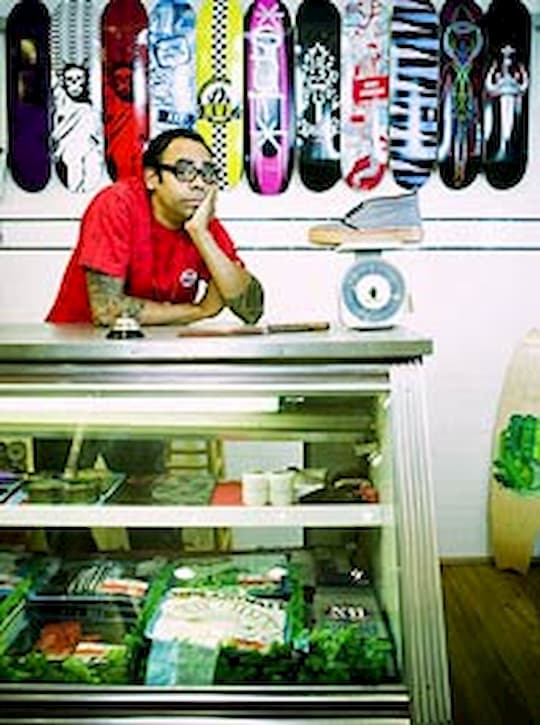 No one had ever done anything like Dave’s Quality Meats. People told me the store needed to look like a gallery and be very minimalist. I was like, “Fuck that” and designed it to look like a butcher shop. Within a couple years, my friend Eli walked into the store with a GQ in his hand and a dollar tucked into it and said, “I believe this is yours.” He handed me the magazine; GQ had voted Dave’s Quality Meats one of the top 25 coolest stores in The States. I have no idea who or where the rezoning attorney is and I couldn’t identify him if I had to, but he was an angel and I owe a big part of my success to him.

Would you say you started a trend in terms of the design aesthetic you brought to the Lower East Side?

I was the first trendy place in the area so the aesthetic set the standard and attracted likeminded businesses.

Through Dave’s Quality Meats I was sought after to do collaborations with different brands. My most popular piece was the Nike Airmax 90 DQM Bacon. I also did designs for brands including adidas, Converse, Vans, New Balance, G-Shock, and Bianchi Bikes.

I eventually got out of the business because kids don’t really care about sneakers now the way they used to. I noticed that as I got older I couldn’t relate to the kids anymore so it was a good time for me to exit the business. The store is now owned by my former partners and is a collaboration with Vans.

After I sold Dave’s Quality Meats I started a shop called Dave’s Wear House. It wasn’t as successful, partly because it’s in Chinatown but mostly because people aren’t buying from local retailers anymore. It’s so bad to see but people will come in, try something on and then buy it on amazon.

What projects are you most excited about now? 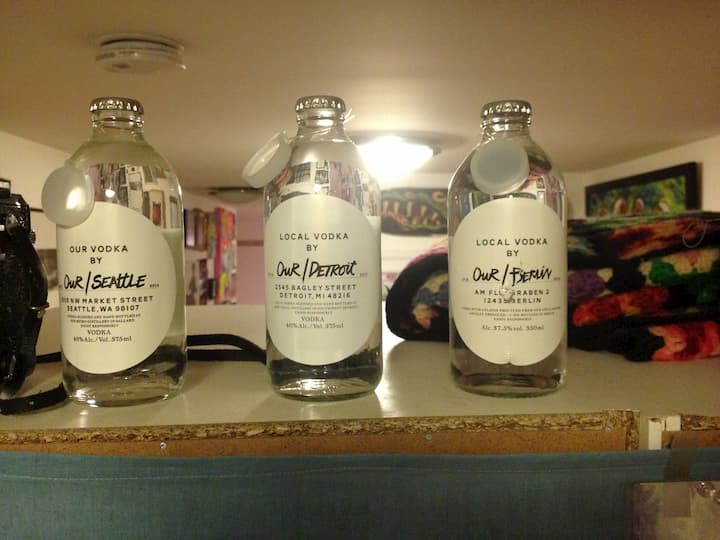 Absolut approached me recently about partnering with them on creating the first distillery in NYC since prohibition. It’s called Our/New York and will open in September 2016. The company is making micro distilleries around the world and finding local entrepreneurs and brand builders to build them and source local ingredients, then sell to whomever we feel is fit to carry the brand. The project is one of 9 opening around the world (Our/Berlin, Our/London, etc), after which the floodgates will open and more can be launched. All of the distilleries will look alike and have one recipe but because we will all source our ingredients locally, each will taste different. Absolut is all about making a high-premium vodka, one of the highest quality products, so it’s very exciting to be part of that. We’re also going to have an event space where guests can come take tours and see the distillery. It’s a great business to be in now. It makes more sense than sneakers and t-shirts. When the chips are down, people drink. When the chips are up, people drink. I am a capitalist. I like to make money. And I like cool projects.

Tell me about your painting and screenprinting.

I’m working on a project based on Hispanic heritage where I paint Goya products. It has an Andy Warhol feel, but it has much more significance to me. Goya started in NYC and has always been found at bodegas, which are the cornerstones of many neighborhoods. Now bodegas are being pushed out. Every time I make one of these paintings, it’s like I am spending time with my family. Whenever people of Hispanic heritage see these paintings, they immediately have a story to tell me. It’s a connection to their culture, to their upbringing. Goya is like the Campbell’s Soup for Latinos. 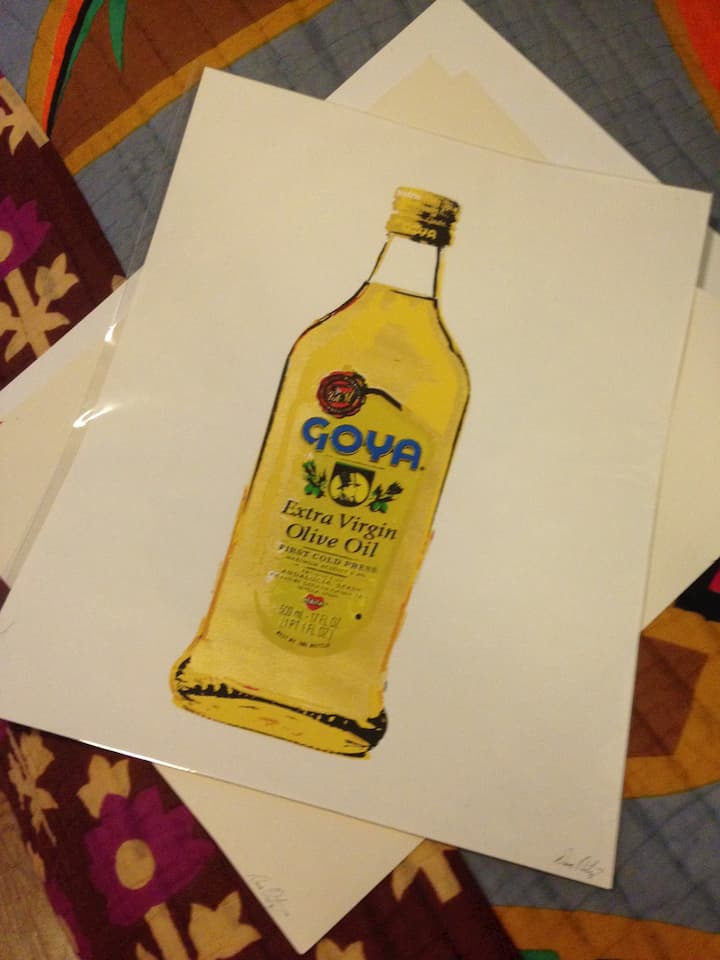 I am also in talks with Goya about using my paintings as part of an exhibit for their 80th birthday next year, which totally came by chance. I did the project, people started seeing the product, and they were like “No way! Goya’s 80th birthday is next year” so we are going to make the exhibition into a bodega feel and my family is going to run the bodega. We are going to use the actual Goya products for cooking lessons with my mom and a modern day chef, we’re going to have salsa lessons, heritage films about the barrio and the Lower East Side as well as the south side of Williamsburg. It will be a whole cultural thing.

Your parents are from Bayamón and Ponce, Puerto Rico. Where do you love to go in Puerto Rico and where would you recommend people go if they want to get away for a long weekend?

No question - Vieques and Culebra. Airbnb a place or check out a place I like called Blue Horizon. They have cute little bungalows where you can chill outside and watch wild horses go by.

You live the life of a true artist. Is this what you always wanted to do?

What does a typical day look like for Dave Ortiz?

Superiority burger. It’s a vegetarian/vegan spot. I’m neither vegetarian nor vegan but I love their food. It’s super healthy, super delicious, and they named a sandwich after me! It’s called the Sloppy Dave. It tastes like a Sloppy Joe but it’s made out of tofu. It’s my absolute favorite place.

Where do you like taking Squishy in the city?

To a park on 17th Street between 2nd and 3rd. It’s a little park near Beth Israel. It’s super cool, has a cool fountain, and there are hardly any people there. 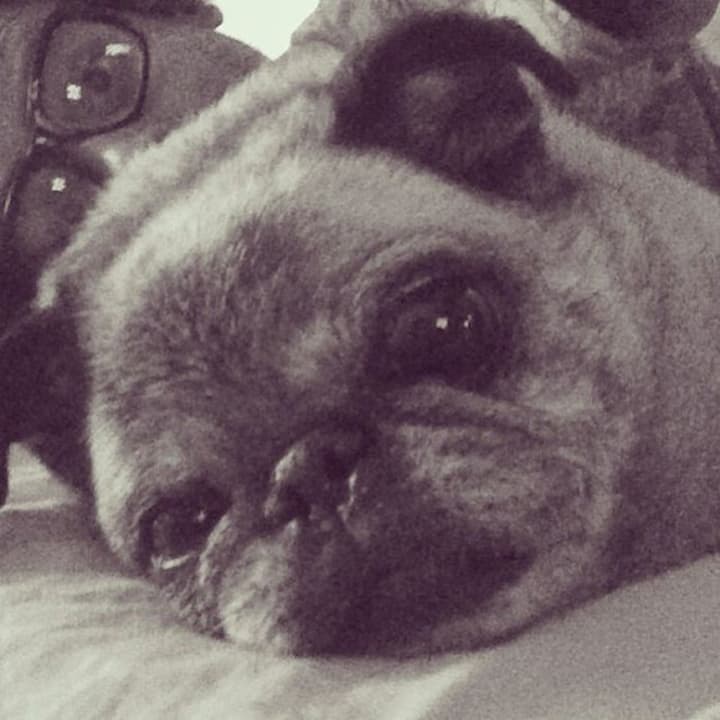 One of the coolest things I like to do with my girlfriend is ride over the Manhattan Bridge, then underneath into DUMBO, then take the road past the park (go past, not through the park) under the BQE, and take the side road to Van Brunt in Red Hook. Ride along the water’s edge all the way to Ikea, then take the ferry back to the city.

My building - 55 St. Mark’s Place! It has ivy on it and it has a stoop. It’s one of the oldest buildings on the block.

My neighborhood! The East Village!

Thank you for taking time to speak with us today!

Find Dave’s art on his website at daveortiz.nyc, at The Joseph Gross Gallery / ArtNowNY on 28th between 10th and 11th, and on Saatchiart.com.